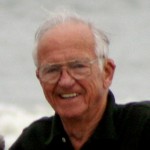 He was a lifelong Elginite and loved this city.  Warren was a graduate of EHS 1945 and excelled at drafting.  He enjoyed class reunions and get-togethers his entire life.  Warren served his country in the Navy on the USS Robert L. Wilson from 1945-48 on the Mediterranean and Atlantic Ocean. He was a talented singer and had an appreciation of classical music.  He was a lifelong Cubs and Bears fan.  He was also a Mason/bricklayer, as well as a contractor and salesman including many years in Blackhawk Manor.  Warren later worked with the Elgin Realtor Hoover Burnidge, and other realtors as well.  Warren was a proud member of the Elgin “Golden” Kiwanis Club. He also enjoyed volunteering with the Hiawatha at Camp Big Timber - Boy Scouts, and Indian guides.  His hobbies included art, and painting.  He is acclaimed for his many pen and ink scale drawings of Elgin historical buildings, and the Elgin House Walk homes, and involvement with “Art for All”.  He was nominated for an Elgin Image Award.

Visitation will be held Tuesday, March 15, 2016 at the O’Connor – Leetz Funeral Home, Elgin from 4 – 8 p.m.  Funeral services will be Wednesday at 10:00 a.m. at the funeral home with Pastor Jeff Mikyska, officiating.  Burial will follow in Bluff City Cemetery.