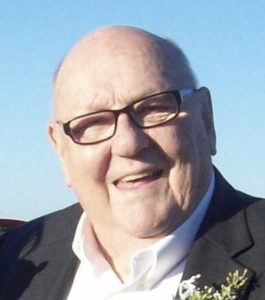 Walter F. Garrett, 85, of Elgin,  passed away on Monday October 7th, 2019, surrounded by his beloved family. He was born to parents Park Garrett and Lessie (Brown) Garrett on November 16th, 1933 in Irvine, Kentucky. Walter graduated from Connersville Senior High School in Indiana, and received a Masters Degree from Ball State University. He was married to his college sweetheart, Joan Steenbergh in 1956, and served in the US Army from August 1956 to June 1958. Walter was an influential teacher; he taught high school English in Richmond, Indiana and at Clay High School in South Bend, Indiana for 10 years. He became a college professor at Elgin Community College (ECC) upon moving to Illinois in 1969, where he started the ECC Humanities department and taught English literature. His dedication and excellence only grew as he continued in his career as an educator. He was awarded Teacher of the Year in 1990, and was President of the Faculty Senate from 1985-1991. He was also a member of the "Fabulous Fifty" as part of the college's 50-year anniversary. Walter was instrumental in the formation of the ECC Faculty Association. Walter retired in 1994. He was a member of the Golden Kiwanis Club in Elgin, loved gardening, cooking, watching Notre Dame win, quoting the classics, and correcting the grammar of others. But his true pride and joy was his family. Walter was predeceased by parents Park and Lessie Garrett, sister, Doris Robinson and brother, James Garrett. His wife of 63 years, Joan, survives him. Walter is also survived by his six children Michael Garrett, Laura and husband Duane Schuldt, Beth and husband Jonathan Small, David and wife Julie Garrett, Martha and husband Derya Sari, and Susan and husband Robert Matlis. Walter always will be lovingly referred to as “Papaw” by his grandchildren: Nathan Schuldt (Meredith), Angela Corben (Brent), Clifford Garrett (Breanna), Kendall Schuldt (Danny), Benton Garrett (Regina), Claire Florine (Dennis), Bradford Garrett, Thomas Small, Garrett Krull, Natalie Matlis, Margaret Sari, Avery Matlis, and Felix Sari. “Papaw” is also survived by his seven great-grandchildren: Wyatt, Emma, Esther, Kristianna, Liam, Hazel, and Ezekiel, to whom he often reminded, “Papaw loves you best of all”. Visitation will be Thursday October 10th from 5 to 8 pm at O’Connor-Leetz funeral home, Elgin, 847-741-1400 .  Burial will be private on Friday.