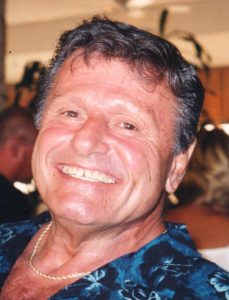 Vernon “Vern” P. Keller passed away March 8, 2021 at Northwestern Medicine Huntley Hospital in Huntley, IL. Vernon was born in Elgin on June 15, 1935 to Vernon P. Keller, Sr. and Thelma Gene (nee Sportsman). Vernon had a competitive personality; he enjoyed playing all sorts of games, especially card night, with his parents and siblings. While attending Elgin High School, Vernon enlisted in the U.S. Air Force where he completed his education and served as an aircraft mechanic in the Korean War. Vernon enjoyed fishing, exercising, racquetball, and golf. He was also a faithful member of St. Thomas of the Apostle Catholic Church in Crystal Lake, IL. Vern worked in Public Service for 39 years with the cities of Bensenville and Cary.  Upon his retirement, after 29 years of service, the Village of Cary presented him with the key to the city in appreciation. Vern was a devout catholic who loved Jesus. His children and family meant the world to him. He had a larger than life personality and a smile to match. He was generous to all who knew him and to the many charities that he supported. He had a big heart, especially for children and animals. Vernon is preceded in death by his parents, Vernon and Thelma; first wife, Carolyn S. Willingham (nee Martin) and second wife, Joyce L. Keller (nee Kenney); brother, David Keller; and son, Vincent Keller. He is survived by daughter Julia (Richard) Sommer; sons, Gary Keller and Charles Keller, grandchildren; Gary Sommer, Tiffany (Jon) Hadley, Paige Keller, Chase Riley, Thomas and Ashley; great grandchildren, Amelia and Abigail Hadley and four sisters, Barbara Capri, Kathleen Mulroney, Diane (Dean) Knight and Kristy (Paul) Engen plus several cousins, nephews, and nieces. Funeral Arrangements have been entrusted to O’Connor-Leetz Funeral Home, 364 Division Street in Elgin. Visitation will be held at the funeral home on Friday, March 12 from 9:00 am until time of service at 11:00. Interment will take place immediately following the service at Mt. Hope Cemetery, 1001 E. Villa Street in Elgin. In lieu of flowers, the family respectfully requests donations be made in his name to St. Jude Children's Research or the National Appeal - Diocese of Rockford. O’Connor-Leetz Funeral Home shall be compliant with the CDC recommendations on social distancing and the merits of health and safety for all its employees, patrons, and visitors of the church.  Masks are required and entry to the visitation will be limited to fifty persons at a time. Once inside, we kindly ask you to engage only in brief salutation to the immediate family and kindly exit, thus, allowing others to enter.