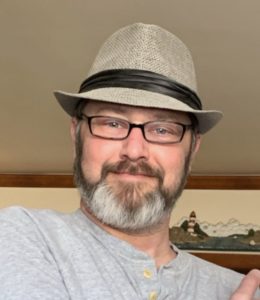 Scott Sidman, 47, died on October 23, 2019. Born in 1972 to Don and Rochelle Sidman (nee Wiener), Scott was the younger brother to Robbin (Chris) and Robert. Scott is preceded in death by his mother Rochelle and his Uncle Harry (Nancy). Scott’s Aunt Maureen, Uncle Steve, and Aunt Nancy will miss him greatly. Scott is survived by his wife, Stephanie (nee Winkler), and their three children, Michael, Emma, and Charlie. Scott met his soulmate, Stephanie, in 1994. Together they built a life and a family that made people smile. The Sandwich War that began in 2010 brought entertainment to everyone who knew of it, and it grew to Epic proportions with Sandwich Lawyers and Judges weighing in randomly and with great enthusiasm. The affection and love between Scott and Stephanie is the stuff you read in fairy tales. They shared a love of motorcycles, camping, science fiction, campfires and 100,000,000 other things that made them perfect for each other, including fights over the thermostat and Stephanie’s taste in movies and music. She loved Armageddon and Rick Springfield, he hated both. Michael, Emma, and Charlie all inherited different parts of their father's personality. Michael has Scott's love of Star Wars and zombies, Emma has Scott's sly sense of humor, and Charlie has Scott's love of all things science. Raising their children brought Scott so many laughs, so much pride, and great anticipation of the humans they are growing into. Poor Scott didn’t realize when he married Stephanie that she came with a HUGE family, who made him theirs. Cathy (Dennis), Tom (Lorrie), Patti (Dave), Tony, Terrie (Dan), and a host of nieces and nephews that adored him will miss him immensely. Scott's enthusiasm for life, grumpy facade, and friendly nature charmed everyone who crossed his path. He thought everyone liked Stephanie better, but that simply wasn’t the case. Scott shined, and people knew it. Scott taught Game Art and Design at the Illinois Institute of Art for several years in the early 00s, and touched the lives of hundreds of people - from the staff members to other instructors and the students themselves. Scott inspired his students to do their best, think outside the box, and helped them achieve their dreams. Scott's most recent work-life was with Aptus Health, where his colleagues enjoyed his grumpy morning rituals of, "don't talk to me before I've had my coffee" and "shut up and get back to work." He prided himself on his ability to figure things out, and if he wasn't the guy to get it done, he would find out who was and help solve the problem. The man was stronger than he knew, a Type 1 Diabetic for over 40 years, a Fighter of Heart Disease for 14 years, and a Cancer Warrior. In honor of his life, please join us at O'Connor-Leetz Funeral Home in Elgin on Friday November 1 at 10 am for a short memorial service, followed by a service at 11, officiated by Pastor Jeffery Mikaska of Holy Trinity Lutheran Church and lunch to follow. Casual attire is encouraged, including anything supporting the Chicago Blackhawks or the Chicago Wolves. Donations in Scott's memory can be made to the Juvenile Diabetes Research Foundation or the American Heart Association. If you so choose, please toast Scott with a glass of William Wolf Pecan Bourbon and a good cigar.