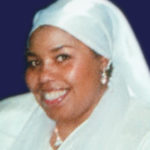 Ruby Terrina Williams (Fina) made her journey to Heaven on April 9, 2018.  She passed away from heart failure with her family by her side, after a long battle with lupus.  Ruby was born October 20, 1964 in Elgin, IL.  She was the daughter of the late Grace Alvarez (Bae Mae) and the late Willie Williams.   She was 53 years old.

She grew up and attended school in Elgin,IL. where she was raised in a Christian household and attended church regularly as a child.  Ruby started her family and moved to Dekalb County, where she raised her loving children.  In her adult life, about 25 years ago, Ruby fully committed her life to the Nation of Islam where she often volunteered and assisted in many National Islamic Cultural Events.  Ruby had a passion for cooking and loved to serve and feed people.   Ruby earned her certification in Food Sanitation and Preparation.  She then received her catering license, and started Ruby’s Catering with her daughters.  Ruby also loved fashion and design and created her own style of custom African style clothing.  Ruby was very active with sports and competition, participating in softball and bowling.  Ruby was often on teams with various family members including her sister and late father.  She loved dancing, movies and was fond of all types of music.  One of her many hobbies was collecting giraffes of all types, which she often displayed throughout her home.

She is survived by her daughter Chimarra (James) Ali, and two sons Charles (Gretchen) Spivey and Reginald Hill; four sisters Eartha (Fred) Blalark, Vera Ayorinde, Tanya (Lynn) Wolf, Carla Williams and two brothers Willie Spates and Tony Williams, 8 grandchildren and a host of nieces and nephews and great nieces and great nephews, as well as many other relatives and friends.

Living true to her name, she was a precious stone amongst us, who never complained about her illness and had the brightest approach to life and unconditional love for her children, grandchildren and her family.

Now we rejoice for she has given life to so many, and her legacy will be everlasting.

Visitation will be held at O'Connor-Leetz Funeral Home on Saturday, April 14 from 9:00 a.m. until time of service at 10:30 a.m. Burial will take place at Bluff City Cemetery immediately following the service. For more information please call 847-741-1400 or visit us on Facebook or our website, www.oconnor-leetz.com.