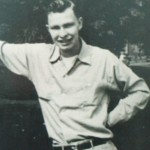 Richard E. (Dick) Paulsen, 82, died July 2 after a long and courageous battle with Multiple Myeloma. He was a long time resident of Crystal Lake, IL.  Dick was born September 6, 1932 in Elgin, IL to Edward & Esther Paulsen.  He was a loving husband of 59 years to Barbara, and devoted father to David (Pam) of Aurora, CO, and daughters Cheryl (Mike) Wietlispach and Vicki (John) Wisser of Crystal Lake.  His legacy will be carried on by eight grandchildren, Adam (Talita), Chris (Katie Brubaker) and Tim (Laura) Wietlispach, Brad and Tom Wisser, Josh and Nikki Paulsen and Kristina Paulsen.  Dick is also survived by his brother Robert (Kay) of Woodstock, IL and cousins Cliff (Mary) Swanson of Bonita, CA and Dale (Rosemary) Swanson of Roy, UT as well as many nieces and nephews.  He was preceded in death by his parents and two infant children.

Dick was a self-employed salesman in the gift industry for many years.  He also owned a TV store in Elgin after graduating from Elgin High School in 1950 and from Coyne Radio and TV School in Chicago in 1951.   Dick was a veteran of the US Army, serving as a radio repairman stationed in Aschaffenburg, Germany, 1st Division Regimental Headquarters from 1953-1954.  There he enjoyed playing basketball for the 18th Infantry, 1st Division team throughout Germany. He was a proud member of the Elgin VFW Post 1307 for 59 years until his death.

Dick was a loyal sports fan, always cheering for his children’s and grandchildren’s teams.  Fishing was a hobby enjoyed throughout his life.

Visitation to be 10am, followed by a memorial service at 11:30a.m. at Bethlehem Lutheran Church, 340 Grand Blvd. Elgin, IL. Graveside service to follow at River Valley Memorial Gardens in W. Dundee, with prayers led by Pastor Carol Book. Burial with military honors will be conducted at River Valley Memorial Gardens, West Dundee, IL.  Friends and family are invited to a luncheon following in the fellowship hall at Bethlehem Lutheran Church. Arrangements have been made by O’Connor & Leetz Funeral Home in Elgin.  Memorials may be made to Bethlehem Lutheran Church, The Wounded Warrior Project, VFW Post 1307 (Fund for Military Funerals) or Transitions Hospice.

Omission of flowers is requested by the family.