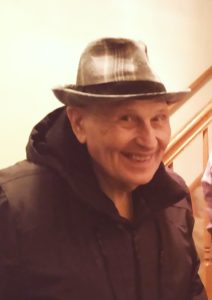 Ray Palmer Heneise, formerly of Elgin, Illinois died in Christ (Romans 6:3-6) on Monday, March 23, 2020 while in hospice care at The Bickford Assisted Living and Memory Care of St. Charles. Ray was born December 22, 1937, residing most of his life in Elgin, with a stint in California in the 1940’s and in Hot Springs, AR from 1999 - 2015. Ray and his wife Dorothy returned to the Fox Valley area as health challenges began to arise, and they wished to be closer to family and friends. Happy always to see acquaintances old and new, Ray frequently greeted schoolmates from Elgin High School (Class of ’56), Larsen, Jr. High, or even from Franklin Elementary. He may not have remembered every name, but he never forgot a face! Ray married Dorothy, née Long, on August 29, 1959 at Holy Trinity Lutheran Church, Elgin, and the two served actively in choir and in Stephen Ministry. They brought that same love of church life to Prince of Peace Lutheran Church in Hot Springs, where new friendships were made and cherished. Chicago Rawhide was Ray’s workplace for 42 years until he retired in 1998. Ray also served at the Elgin Moose Club, enjoyed camping, and was very much a fan of his children’s and grandchildren’s sports and other activities. Among his favored hobbies was being a Big Timber Dancer. Ray’s years in the Song of Hiawatha Pageant began when he was a teenager, continuing through the final performance in 1979. Teaching American Indian lore was a great joy to Ray and he loved seeing his children grow in learning dances and creating beautiful beadwork, just as he had. They carried on Carl Parlasca’s legacy over the decades, performing with the dance team in parades, Blue and Gold Dinners, and community picnics, too numerous to count. As recently as 2018, Ray shared his “Pageant” experiences with the Elgin Memory Café group, donning some of his outfit as naturally as ever. Everyone who met Ray would say what a friendly man he was. He genuinely enjoyed people and telling his stories to them. It just came naturally that this most-kind man gave of himself, whether or not he knew the person in need. His ready smile and robust laughter now connect so many great memories of roller-coaster rides, favorite music, polka dancing, creating artwork, and his simply being a loving, family man. Ray was preceded in death by his dear wife Dorothy in 2019; parents, Oscar Heneise, Sr. in 1963, and Bernice, née Starin, in 2005; brothers Oscar Jr., “Ozzie,” Donald, and Robert. He is survived by his children Nancy Curran, David (Christine), and Valerie (Perry) Reh; grandchildren Jeremy and Michael Curran, Melissa (Cory) Day, Christian and Joellie Heneise, and Stephen (Sarah), Anthony (Katlyn), Natalie, Mitchel, and Quinton Reh; great-grandchildren Lilly, Dylan, and Vivianne Day, and Charlotte Reh; sister Susan (M. Joseph, Sr.) Franks, and his many nieces and nephews. A Memorial Service shall be held at Holy Trinity Lutheran Church, Elgin, along with a committal service to follow at Lakewood Memorial Park at a future date.  Please check with this posting here, on our Facebook page, or please contact the funeral home for further information.