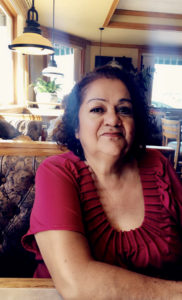 Olga Maria Martinez, age 68, passed away April 20, 2020 in Advocate Sherman Hospital, Elgin, IL suddenly from multiple health conditions.  She was a resident of Elgin, IL for 44 years and as of late, a resident of Fox River Rehab & Healthcare, formerly Rosewood Healthcare where she was also employed as housekeeper years ago. Olga was born on May 24, 1951 in Mexico (Uriangato, Guanajuato) to Agustina Murillo and Tomas Martinez of Spain and French family origins.  She is preceded in death by her husband, Miguel Angel Martinez Sr. who passed away in 2009. She was the youngest of 4 sisters and 6 brothers and whom she is survived by Rosa, Yolanda, Elvira, Roberto, Jesus, Artemio, and Manuel all whom reside in Mexico. Her four surviving children are Miguel (Maria) Martinez Jr., Francisco Martinez, Olga E. Martinez and Israel (Hillary) Martinez and 5 grandchildren, George Anthony Espinoza, Yazmine Martinez and her brother Michael Diego Martinez; Genevieve Rose and her little brother Domenico Israel, and many nieces and nephews. Olga, being raised in a Catholic family, was a compassionate and dedicated loving mother who always worried about her children.  She liked to talk on the phone with her sisters and brothers and called her children regularly to see how everyone was doing including her grandchildren.  She always spoke to her children in Spanish so they would not forget the language and likewise, her children would speak English to her so she could improve her English which she would later find it to come in handy when trying to help someone who only spoke in English.  She associated herself with the poor and needy. She was sympathetic to everyone especially the homeless and easily related to anyone who she saw as struggling. Olga always felt she could possibly help someone in need, having herself grown up in very poor conditions in Mexico as a child.  She was welcoming and always wanted to share anything she had or cooked and had a keen awareness of including everyone around her.  She loved to watch Mexican tele-novelas and was always touched by dramatic scenes, storylines and turn of events.  Her lifelong hobby was knitting and helped to calm her down in times of stress and anxiety.  She was very personable and was always interested in starting conversations with anyone no matter what race, color or background. Olga's story is that of a 24-year old immigrant who decidedly came to America with her two sons Miguel at age 2 and Francisco at age 1 to seek better opportunities with her husband Miguel who had family he could meet with and that had previously established themselves in Illinois.  Miguel and Olga were among the very few first Hispanic families that settled in Elgin in 1976 and were hard working and held two jobs at times to help make ends meet.  With her grade school education she and her husband eventually relied on temp to hire job agencies to get her jobs at factories and eventually just cleaning and housekeeping jobs and once worked as a lunch lady at Gifford Elementary school in Elgin, IL where her children attended.  Her husband Miguel had achieved a Mexican technical degree in Diesel Engine mechanics but could not use it in America as he only spoke Spanish and his English was very limited.  Years later Olga's family would obtain US Permanent Residency in 1990 and Mexican-born children Miguel and Francisco would eventually attain U.S. Citizenship while attending Larkin High School in Elgin.  All children eventually graduated college and the success and legacy of Olga's immigrant story is today reflected in the passion for achievement in the jobs and careers held by her children. Miguel as a Police Officer. Francisco as a Communications manager/Independent Researcher and formerly Mechanical Engineer. Olga Jr as a manager for a big telecommunications corporation.  And finally, Israel as an IT professional for a U.S. Dept of Energy National Laboratory for Science and Engineering.  Olga's love and dedication to her family contributed a great deal to their children's persistence to succeed and outlook on life. Olga Martinez will be dearly missed. Services will be held Friday, April 24th from 5:00 until 7:00 p.m. at the O’Connor-Leetz Funeral Home, Elgin.  Burial will be private.  For more information please call (847) 741-1400. O'Connor - Leetz Funeral Home shall be compliant with the CDC recommendations on social distancing and the merits of health and safety for all its employees, patrons, and visitors of the funeral home.