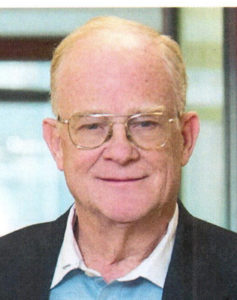 John Scott Hoff passed away peacefully at his home in Lake Forest, while surrounded by loved ones, on May 23rd. Born on 2 Jan, 1946 in Des Moines, IA to John Richard Hoff and Valetta Florence (Scott), John graduated from Drake University in 1967 with a degree in Business Admin. He was a member of Phi Delta Theta fraternity and was active in USAF R.O.T.C., commissioning as a 2/Lt. on 5 June, 1967. His initial assignment was at Dyess AFB, Abilene, TX where he also attended Hardin-Simmons Univ. John completed a Master's Degree in Business Admin. at Cal State Fullerton in 1971. He did 1 year studying constitutional law at Oxford University in England in 1973 and earned his Juris Doctorate degree in 1975 from S.W. University in L.A. In July 1975 John married Shirley Jo Ward and they had 2 children, which they raised in Winnetka. Because of his love of flying and travel, he completed his FAA Private Pilot's License in 1976 also earning his Instrument, Commercial and Flight Instructor ratings, and flew recreationally up until his passing. In 1976 John moved to Chicago, IL, joining the firm of Lord, Bissell & Brook, working in aviation litigation. He formed his own law practice in 1981 and merged The Hoff Law Group with Cremer & Spina in 2016. John earned a 2nd Master's Degree of Military Science from AMU of Manassas, VA in 1996. He retired as a Colonel in the Air Force, receiving the Legion of Merit in 1998 after 31 years of service, which included his assignment in the Pentagon. He became a licensed Illinois Real Estate Broker, CPCU & CCA in 1980. John taught as an Adjunct Professor of Aviation Law at John Marshall Law School for 20+ years. He loved participating in the Boy Scouts of America, with his son, and continued to serve as Asst. Scout Master with Troop 20, in Winnetka, for 24 years. John also performed in the Winnetka Village Follies for 25+ years, entertaining audiences and co-stars with skits and his unique brand of humor. He was an avid collector of red sports cars, war books, pilot wings, military medals, coins, and anything aviation related. John is survived by his wife, Harriet (Ross), son John Baron (34), daughter Jennifer Jo (Douglas) (36), step-son Douglas, and 5 grandchildren. A Celebration of Life will be held at the Winnetka Community House on Sunday, June 16th at 2pm. Burial, with military honors, will be on Monday, June 17 at Glendale Cemetery in Des Moines, IA. In lieu of flowers, the family is requesting donations be made to the USO of Illinois, in John's honor, where he served on the B.O.D. for over 20 years (www.uso.org).