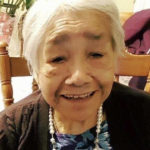 Doña Chuy was born in La Peña, Guanajuato, Mexico on November 21, 1920 to Zenaida  (Vargas) and Sabás Madrigal. She was the oldest of seven daughters. She lived a wholesome childhood and helped her father in their farming activities, something she always remembered fondly.

Doña Chuy married Daniel Camacho, Sr. at a young age. They moved to the city of Leon where they set up a shoe making business. Despite its success, they eventually immigrated to the United States. Daniel immigrated first and found work under the Bracero Program. Since Doña Chuy never had a formal educated, she learned to read and write so she could communicate with Daniel while they were apart.  Doña Chuy and their young children joined him in the U.S. in 1958.

Doña Chuy enjoyed gardening and every summer grew a large vegetable garden. She was always happy to feed anyone the delicious, homemade Mexican food that she had prepared. Her and Daniel were known for their generosity to those in need. Despite the injustices she had endured throughout her life, she will always be remembered for her kind, gentle, generous and forgiving manner.

Doña Chuy was always grateful to this country for the opportunities her family was given which allowed them to fulfill the American dream. She retired from Ducane Industries where she was a highly esteemed employee known for hard work.

Doña Chuy is preceded in death by her husband, Daniel and her parents.  She is survived by her five children, nineteen grandchildren and many great-grandchildren.