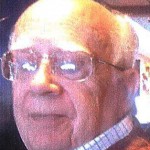 He worked as a teacher starting in 1965 at Ellis Middle School, and Larkin High for 30 years.  Don was known to be a conscientious, “tough but fair” caring math teacher, with a sense of humor.  He enjoyed photography, and was one of the first educators to teach computer science.  He graduated from the Illinois Institute of Technology, and worked at the Elgin Watch Factory to put himself through school.  After retirement he was a dedicated volunteer at Anderson Animal Shelter, So. Elgin, where he photographed the adoption Dogs for publication in the local papers.

He is preceded in death by his parents.

Don is survived by one brother Robert (Jolene) Kappes of Elgin; two nephews, Aaron of West Dundee, and Nathan of Chicago; many friends.

Visitation will be held Monday, July 27, 2015, from 9:00 a.m. until time of Memorial Service at 11:00 at Holy Trinity Lutheran Church, 357 Division Street, Elgin with Pastor Darryl Thompson Powell, officiating.  Burial will be private.

Memorials may be made in Don’s memory to the Anderson Animal Shelter and American Cancer Society.  For more information please contact O’Connor – Leetz Funeral Home, Elgin (847) 741-1400.