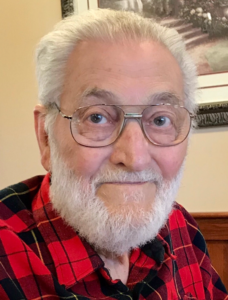 Clarence (Leon) Miller passed away peacefully at Rosewood Care Center in Elgin, IL on September 12, 2019 after several years of declining health. He was born on September 27, 1930 in Liberty, Indiana, the first of four sons born to D.L. and Ruth Miller. After a year in Texas for Brethren Volunteer Service, he came to Elgin to serve at Elgin State Hospital as a conscientious objector. It was there that he met Carol Miller who became his loving wife of 68 years. Leon worked for most of his career as a printer at the Church of the Brethren Publishing House. He had many interests including reading, bicycling, science fiction, theology and gardening. He was active in his church and cofounded the Highland Avenue Soup Kettle. He never stopped learning and loved a lively discussion on politics or religion. He earned his Associates Degree in 1973 from Elgin Community College and took several classes at Triton Community College. He is survived by one brother, Charles Miller of Hagerstown, IN, three children, Ginger Florence (Ernie) of Montgomery, Roger Miller (Sandra) of Wauconda, Anthony Miller of Elgin, four grandchildren, Ashley Ortiz (Joel) of Chicago, Andrew Miller of Elgin, Todd Florence of Chicago, Maxwell Miller of Wauconda, three great grandchildren, Cassandra and Isabella Cruz of Montgomery, and Michael Ortiz of Chicago. He was proceeded in death by his parents, two brothers, daughter in law Ellen Miller, and his wife Carol. A memorial service will be held at Highland Avenue Church of the Brethren at 783 W. Highland Avenue, Elgin, on October 12, 2019 at 3:30 PM. Visitation with the family will begin at 3:00. Guests are invited to stay for a meal hosted by the family and in conjunction with the Highland Avenue Soup Kettle at 5:30. Memorials may be directed to Highland Avenue Church of the Brethren designated for The Elgin Soup Kettle.