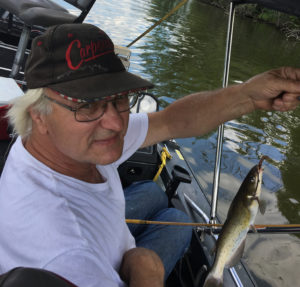 Steven A. Oclon of Elgin, IL, age 64, passed away Saturday November 9, 2019 while in South Elgin, driving his truck. Steve was born May 16,1955 to Irene (Kossakowski) Oclon and Joseph  Oclon in Chicago Illinois. Steve graduated from Elgin High School in 1973. He married Rowena (Doss) Oclon December 8,1978. Steve was a jack of all trades and a book of knowledge. He loved learning trivia and interesting facts. Steve knew how machines worked and was an inventor. All his life he troubleshot problems and made things work. Steve was a master carpenter, a graphic artist, and a machinist. Steve Oclon could accomplish anything he put his mind to. Words cannot express how much we loved Steve, as husband, as dad, or as grandfather. Many people knew him as Uncle Steve. He was our best friend. Everyone knew Steve's love for family and friends, his beautiful sense of humor and the loving nick names he gave many of us. Steve Oclon (Jaddek) loved his grandchildren and every moment spent with them. Steve is survived by wife, Rowena Oclon, 3 sons, Joseph and Jessica Oclon, Clifton Oclon and Lori Chavez, and Mathew and Kim Oclon, 2 adopted daughters, Davina Rasmussen and Jamie Rightmire, three grandchildren, Virginia Oclon, Wallace Oclon, and Darwin Oclon, and one grandchild on the way (Steven); 2 brothers, Joseph Oclon and Albert Oclon, and his sister, Kathy Zablockij. We are grateful and blessed to have had him in our lives. Steve is in heaven now with his Niece Falecia, Nephew Joshua, and brother James. We will be remembering Steve's life and talking about our love for him November 15 at the Lord's Park Pavilion,100 Oakwood Blvd. in Elgin from 4:00 pm to 8:00 pm.