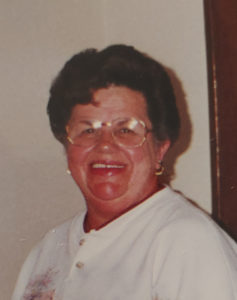 Ruth D. Smith, 80, died at Presence St. Joseph Hospital on January 8, 2020. Ruth was an Elgin native. She was born on May 9, 1939 to Leonard and Irene (Hopp) Genz. She graduated from Elgin High School in 1957. Ruth met her husband, Jim while working at Juby’s Drug Store. She had a love of horses and was a huge Roy Rogers fan. Ruth never had a cross word to say about anyone and everyone who met her, loved her. Ruth is preceded in death by her parents; Leonard and Irene, her aunt and uncle; Mildred (Hopp) and Whitey Andresen, and her brother; Robert Genz. Ruth is survived by her husband, James E. Smith, son; Randy (Anna) Coester, daughter; Christy (Butch) Carter, grandchildren; Jesse Coester, Amanda Coester, Colton Carter, and Sam Carter, sisters; Lylas Richoz and Phyllis (Jim) Doss and many nieces and nephews and her beloved cat, Penny! Visitation will be held at O’Connor-Leetz Funeral Home, 364 Division Street, Elgin on Sunday, January 12 from 12:00p.m. until time of service at 3:00p.m. Service will be officiated by Pastor Jeff Mikyska of Holy Trinity Lutheran Church of Elgin. Burial will be private.