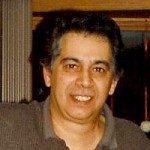 Ronald John Ferazzo was born February 1, 1945 and died September 1, 2015. He was born in Chicago to the late Joseph & Rose Ferazzo.

Ron was a unique barber who had created his own cut.  He was an artist in his own right.  Through retirement he created his own business in solar sunscreens.  He will be missed by all of his family and friends.

Visitation will be Saturday, September 5, 2015 from 8:30am to 10:30am at O'Connor-Leetz Funeral Home in Elgin. Funeral mass will be held at St. Laurence Church, 565 Standish St., Elgin at 11:00am and will be officiated by Father Andrew Mulcahey. Burial, following mass, will be at St. Joseph Catholic Cemetery in Chicago. Please call 847-741-1400, O'Connor-Leetz Funeral Home, for further information.