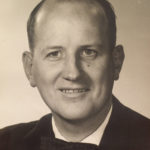 Robert Warren Bedard died at home on March 2, 2016 at age 89 years. He was born in Chicago, IL to Frederick and Mae Bedard on August 21, 1926 and spent his childhood in Villa Park, IL

Bob enrolled in Wheaton College but shortly afterwards, in 1944, left to join the Navy. He studied and taught electronics while at Treasure Island in California. After World War II he returned to Wheaton College and also attended Pierce School of Theology. He graduated from both schools in May of 1950.

In 1949 Bob met Waunetta E. Stout in a Sunday school class which led to their marriage on May 5, 1951. After his ordination that same year, the couple joined The Evangelical Alliance Mission, (TEAM). In December of 1954, they  lived in Costa Rica, Aruba, and Lima, Peru where Bob worked establishing Christian Radio Stations for twelve years. While in Peru, Bob also taught religion, science and math at Collegio San Andreas, a Boys’ secondary school which was operated by the Free (Presbysterian)Church of  Scotland.

After returning to the states in 1966, he became involved in the corporate world and went on to earn a MS in Business Management at Lake Forest College. In 2008, he closed his business of Quality Management and retired. He loved teaching bible classes and did this as often as asked to.

Bob is survived by his wife, Waunetta, their three children; Carol Lynn (Dewaine) Nelson, Robert David (Anne) Bedard and Linda Faith (Nelson) Burgos, 7 grandchildren and 7 great-grandchildren.He loved his family and especially enjoyed their laughter and fellowship with each other at family gatherings.