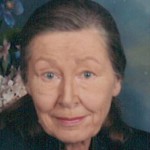 She is preceded in death by her parents and her brother, Rudy Helm, a pilot, who died at the young age of 42 years.

Phyllis was born at Sherman Hospital, and graduated from Elgin Academy, however, her family lived all over the U.S. as her father was transferred many times while he was in active service during World War II.

Phyllis was proud of her family roots and their history in Elgin. Her great grandfather, Dudley Randall, started one of the earlier newspapers in Elgin and Aurora. It was called “The Daily Dud”. Randall Road is named after him. Her father was a “pioneer pilot”, who opened the first airport that served Elgin and the surrounding communities.  He was called to active services at the onset of World War II to train new pilots. She had fond memories of flying with her father as a young girl; “In a bi plane, sitting on his lap, wind blowing in my face, in my flying suit, goggles and helmet.”

When she married Robert Krueger in 1949, he too, was soon called to service by the army and soon they were stationed in places like Africa, Egypt, and Turkey. While in Africa, Phyllis befriended an Ethiopian family who she took under her wing and made sure the children received formal educations, straight through college. She remained closed to the family all through her life.

Phyllis was a long time member of many organizations; the Sherman Hospital Auxiliary, the Humane Society, Womens’ Republican Club and an  active member of The First Congregational Church of Elgin. She was also an avid gardener.

A private Service and Burial will be held at Bluff City Cemetery in Elgin on Thursday, September 3, 2015 at 12:00,noon. Service will be officiated by the Rev. Dr. Paris Donehoo of The First Congregational Church of Elgin. Please call 847-741-1400 for more information.