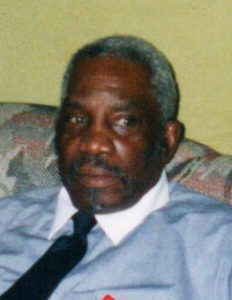 Monroe Clark of North Chicago, IL, formerly of Kenosha WI, was received by his heavenly Father on June 18, 2020. He was born in Austin TX. on July 17, 1939 son of Ardell and Sammie Mae Clark. He was the oldest son of ten siblings. As a young boy he worked on a corn and cotton farm, which neither one he liked. He held his first job at the age of 15. He later enlisted in the United States Army where he attended boot camp at Fort Carson, Colorado. It was there that he received training as an automotive mechanic and was later sent to Korea where he was stationed for 13 months. After returning from Korea, Fort Knox, KY was home until he was sent to Vietnam. It is believed that while serving in Korea or Vietnam he sustained an injury to his spinal cord. Monroe furthered his military duties in Fort Hood, TX where he worked in security. After retiring from the U.S. Army he returned home to Austin TX.  Following he moved to Elgin, IL where he resided for many years. He worked several years for Elgin Mental Health Center as a Security Officer. Monroe was briefly married but never had any children. He was preceded in death by his parents Ardell and Sammie Mae Clark, three brothers: Charlie, Jimmy and George Clark and  three sisters: Lucille Atwood, Mary Ross and Margaret Hayes. Several nieces, nephews, cousins and friends. He leaves behind to cherish his life three sisters: Ida Mae Bryant, JoAnn Clark and Estella Stewart all of Elgin, IL. and a host of great, great-great nieces and nephews and friends. Monroe was loved and will truly be missed. "My mind is on God" A visitation (limited entrance, masks, and social distancing is required, please) will be held at O'Connor- Leetz Funeral Home, 364 Division Street, Elgin, on Friday 26, 2020 from 10:00 am until 11:45 am. Procession to Lakewood Memorial Park, 30W730 US 20, Elgin IL is at 12:00 pm. Elder Cleatus Dale Stewart of Living Gospel COGIC, officiating.           Procession Lakewood Memoria Park 30W730 US 20 Elgin IL 60121