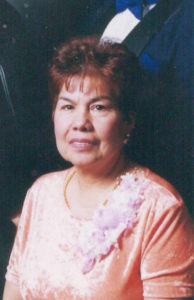 She was a manager at Pay Less Shoes in Bensenville for ten years. Margarita was a proud member of the First Spanish Baptist Church of Bensenville where she was a valued member on many committees.  She also enjoyed bowling, and her beloved family, especially her sisters.

Margarita is preceded in death by her parents; three brothers, Juan, Julian, and Manuel; her first husband of 21 years, Luciano Nunez.

Visitation will be Saturday, May 16th from 9:00 a.m. until time of service at 11:00 at the O’Connor – Leetz Funeral Home, Elgin, with Pastors Tony Saavedra of Agape Chapel of Illinois and Jose Velasquez from the First Spanish Baptist Church of Bensenville, officiating.  Burial will follow at the Lakewood Memorial Park Cemetery, Elgin.