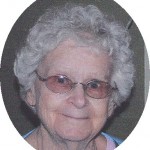 Margaret Warren, 91, of Elgin, died Tuesday, August 14, 2012 at home. She was the daughter of Hermina and Anthony Klemp of Highland Park, IL.

Margaret is preceded in death by her parents and sister Dorothy Schneider.

Margaret was a long time member of St Mary’s Catholic Church, Elgin serving on the Womens’ Guild.  She was an avid Cubs fan.

Visitation will be Thursday, August 16, from 4:00 – 8:00 PM at the funeral home. Mass will be held Friday August 18 at 11:00 am at St Mary’s Catholic Church, Elgin, Father Robert Camacho officiating. Burial at Mount Hope Cemetery, Elgin.