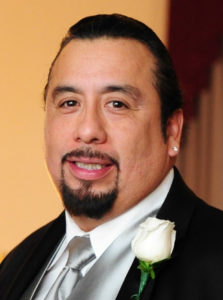 Luciano Nunez, Jr., 57, of Bensenville, IL passed away Tuesday, November 26, 2019 at Alexian Brothers Hospital, Elk Grove. The son of Luciano Nunez Sr and Margarita Garza Nunez Murillo, he was born on August 16, 1962 in Evanston, IL. From birth Luciano has proven to be a fighter, being born 3 months prematurely. Luciano began working in construction at the age of 17 along with his father, uncles and many cousins. He absolutely loved it, concrete was his life. He took pride in everything he did and made sure that whatever job he was given, it was done right. Luciano dedicated his time to his family, helping them in any way that he could. He enjoyed listening to music, especially Pink Floyd, and watching M.A.S.H re-runs. He had a passion for building things, he could fix or rig anything to work. He was the original MacGyver. His favorite holiday was the 4th of July, because he absolutely loved watching fireworks. When July 5th came around he was already planning for the next year's 4th of July. A big part of Luciano’s past time was sports.  He loved his Chicago teams: Bears, Bulls and of course his Chicago Cubs. He will be missed by many…. Luciano is preceded in death by his parents: Luciano Nunez, Sr. and Margarita Garza Nunez Murillo and great nephew, Emilio Lucio Flores . He is survived by his two children Luciano Nunez, III and Diana Nunez. His grandchildren Lorenzo Luciano Nunez and Lucas Alfredo Nunez. His siblings. Linda, Luis, Leo and Alfonzo, Stepfather Alfonzo Murillo.  Several nieces and nephews, including Letty, Alex, Maggie, AL, Angel, Selena, AJ and Sophia, and many cousins and friends. Visitation will be held Tuesday, December 3, 2019 from 9:00 a.m. until time of service at noon at the O’Connor – Leetz Funeral Home, 364 Division Street, Elgin.  Burial shall follow at Lakewood Memorial Park Cemetery, Elgin. Memorials may be made in Luciano’s memory to the family.