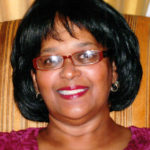 Lorraine Montgomery was born in Cincinnati Ohio to Charles and Louise Whitehead on April 14, 1946.

She grew up in the west end neighbourhood where her parents managed a small grocery store. Lorraine assisted in the store, working closely with her Aunt Julia Bird (Aunt Candy).

Coming from a large extended family of uncles, aunts, and cousins who gathered regularly for family outings, some of her most memorable outings were fishing trips with Uncle Ben Whitehead and her cousins.

Lorraine graduated from Our Lady of Angels Catholic High School, in 1964 where she was a cheerleader and voted most attractive in her high school year book. During this time, at her 15th birthday party, Lorraine attracted the attention of Leon G. Montgomery Jr. They became sweethearts and later married on January 21, 1967. This union lasted more than fifty-one years. In this Union Leon and Lorraine would have two daughters: Liane and Liana.

Lorraine loved the Lord and she loved her church family at New Hope Baptist Church, where she remained in membership for thirty years. She was a Sunday School Teacher, a member of the choir, member of the Missionary Board, and later became an Ordained Minister.

Lorraine’s large extended family upbringing taught her togetherness and love for family. As an adult, she often demonstrated this love during cookouts in the backyard, shopping trips with her daughters, and dinner outings with her husband. Lorraine was a great wife, mother, grandmother and mother-in-law. She will be dearly missed as we are heartbroken. We will be forever grateful Lorraine was in our lives.

Lorraine was preceded in death by her parents, Charles and Louise Whitehead, a host of aunts, uncles, and her in laws, Leon and Wanda Montgomery.

She is lovingly survived by her husband, Leon Montgomery, her daughters Liane Allen and Liana Montgomery, her son-in-law Terrance Allen, and her grandchildren, Noah and Naomi Grissette.

Lorraine passed on to glory on February 17, 2018 at 9:15am.  She will be deeply missed. She was a woman of faith, honor, love and devotion. Our beloved Lorraine has her crown now. Well done Mom! Well done grandma! To God Be the Glory!