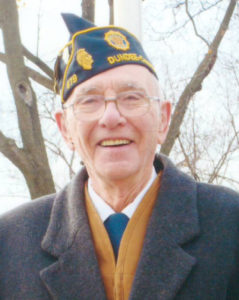 Lawrence D. Zea, of Carpentersville, formally of Chicago, went to be with his Lord on Saturday, April 18, 2015.

He was a loving husband, father, grandfather, great-grandfather, brother, and a trusted friend to all who knew him.

Proud World War II Veteran, he made his living working for 34 years on the Chicago and North Western Railroad, and part-time making deliveries for City Bonded and RR Donnelly. But, his true passion was serving the Lord. Whether it was preaching at the First Baptist Church of Meadowdale in Carpentersville or bringing God’s words to the halls of Heritage Nursing Home. He took his God with him wherever he went. He even found time to become a surrogate grandpa/mentor to the 4th grade classes of Mr. Mark at Parkview School for 8 years. He also served proudly as the Chaplain of American Legion Post 679.

In lieu of flowers, his family asks that you please consider making a tribute donation in his name to PulmonaryFibrosis.org or, if you prefer, you can mail your donation to: Pulmonary Fibrosis Foundation, 230 E. Ohio St., Suite 304, Chicago, Il 60611-3201.