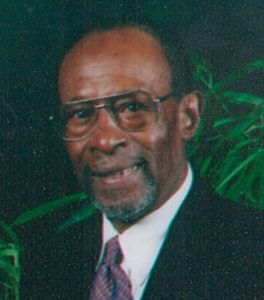 L.C. West, 92, of Elgin, went home to be with the Lord at 2:50 am on Friday, May 16, 2014 at Tower Hill Nursing Center.  He was born on February 9, 1922 in Parkin, Arkansas to George and Minnie(Warren) West, where his family later moved to Pulaski, IL.  After spending time in C.C Camp, L.C enlisted in the U.S Navy in 1943.  He was in the Pacific fleet and was honorably discharged in 1945.  He then moved to Elgin where he married the love of his life, Mary Wheeler.

L.C. is survived by 1 daughter, Carol Price of Berrien Springs, MI; 2 sons, Lewis (Cheryl) West and Kendall West of Elgin; 3 grandchildren; 5 great grandchildren; a niece, Marry Woods of Chicago; and a great niece, Inez Parks of Covert, MI; 2 Sister-in-laws; and a host of nieces and nephews.

He is preceded in death by his parents; his loving wife, Mary; 1 son, Alan West; and two brothers, John Woods and Johnnie West.

L.C worked for several companies including Kerber Packing, Wheeler Trucking, and finally, Ace Coffee Bar, finally retiring.  He was a lifetime member of the Elgin VFW Post 1307, as well as past commander of the Elgin VFW, staying very active until his illness.  He also was an avid bowler.  L.C. accepted Jesus Christ as his Lord and Savior many years ago during bible camp in TN.

There will be a visitation for L.C. starting at 10am until time of service at 11am.  Services will be held at O’Connor- Leetz Funeral Home and an Internment at Bluff City Cemetery in Elgin following the service.