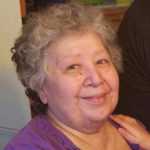 Jovita Carr peacefully went home to our Lord on April 9, 2018.  She was born February 15, 1945, in Robstown, Texas to Simona (nee Perales) and Felisiano  Gonzalez.

Jovita  moved to Elgin in the early 1960s from Kingsville, Texas where she met her beloved husband, Nicolas.  After a six-month courtship, they were married in Kingsville, Texas. He called her “my honey.” She called him “hon.” They were rarely apart and celebrated their 50th anniversary in December. He was at her bedside for months during her illness. She was as devoted to him as he was to her.

They relocated to Carpentersville and lived there for the last 38 years where she was  a member of St. Monica Catholic Church.  She worked at ITW Shakeproof in Elgin, Allstate in South Barrington and retired from Score Corp. in Itasca in 2010.

Jovita’s legacy is her family. She was a loving mother and a doting grandmother. She made her children and grandchildren feel special by doing little things like making their favorite birthday meal. She was always there for a much-needed hug and a word of encouragement. She was strong, caring and had a beautiful spirit. She was  the family matriarch, a caring sister and “Tia Jo” to everyone. She was there for the birth of nieces and nephews and their children. It filled her heart with joy to cradle every new baby in the family.

She will be in our hearts, thoughts, and prayers forever.

Jovita is preceded in death by her parents and a brother, Noe Gonzales.

Visitation will be held on Wednesday, April 11 at O’Connor-Leetz Funeral Home in Elgin from 4:00 p.m. until 8:00 p.m. Funeral mass will be at St. Monica Catholic Church in Carpentersville on Thursday, April 12 at 10:00 a.m. with burial immediately following the service at Mt. Hope Catholic  Cemetery in Elgin.