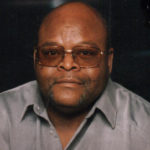 Johnny accepted Christ at an early age. On one Christmas day in 1981, Johnny received a special gift, his son, Christopher Jonell Simmons was born. He married Evelyn Lewis in 1983 and they had five children. Johnny worked for the Rockford Housing Authority Committee Board.

Johnny loved his family, his friends, and his hats! He really enjoyed his last visit to California to see his son, daughter-in-law and grandchildren.

Visitation and funeral service will be held at O’Connor-Leetz Funeral Home, 364 Division St., Elgin. Visitation begins at 10:00 a.m. until time of service at 11:00 a.m. Service will be officiated by Minister Roger Simmons and Pastor Cedric Simmons of Bethesda Baptist Church. Burial will take place at Bluff City Cemetery in Elgin immediately following the service.