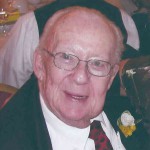 James was a proud veteran of the Korean Conflict having served in the Army within the Criminal Investigative Division.  He was President of his 1946 graduating class at St. Edward’s High School.  He then graduated in 1950 from Loras College in Dubuque, IA where he majored in English.  He was a longtime manager for Osco Drug, and loved reading, remodeling, and his golden retrievers.

For more information please contact the funeral home at (847) 741-1400, and visit our website oconnor-leetz.com and on face book O’Connor-Leetz F.H.