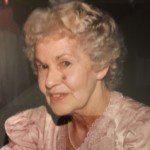 Helen Burbury, age 94, passed away peacefully on January 26th in Springfield, Missouri.  She was born on February 9th, 1921 in Minneapolis Minnesota, daughter to Helen Stenberg Parrott and Whipple Owen Parrott.  She and her husband, Carlos Burbury, lived in Elgin for over 50 years.

Visitation will be from 10am until time of service at 11am, Monday, February 1st, 2016 at O’Connor-Leetz Funeral Home in Elgin.  Service will be officiated by Reverend Glen Morden of New City Church in Elgin.