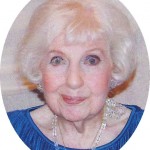 Helen is survived by her son, Raymond Long, 10 of her 11 grandchildren, 19 great-grandchildren, and three great-great grandchildren.   Preceding her in death was her daughter, Virginia Oliver, her husbands,  Edward Long & Gus Karnold, and  her eight siblings:  John, Eleanor, Florence, Betty, Ray, Clara, Louise, and Clarence.

When asked to share her secret for a long life, she responded, “You need to be kind, take care of yourself, and take care of your mind.”  Helen was an avid cross-word puzzler and often said, “If you don’t  use it (your mind) you’ll lose it.”

Believed to be Elgin’s oldest resident, Mayor Ed Schock declared Helen’s birthday to be Helen Karnold Day.  Helen was a remarkable woman whose vitality and zest for life will be dearly missed.