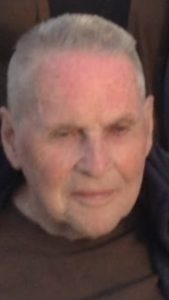 He was a proud veteran of the United States

Army Air Force in WWII where he served as

an aerial gunner.  He also served as a volunteer

fireman for 20 years with the City of Winfield.

Gordon was also a plumber for Hines VA Hospital

in Maywood for 20 years until his retirement.  He

was an avid motorcyclist and enjoyed fishing.

Gordon is preceded in death by his first wife, Eveleen

He is survived by his four children; 7 grandchildren,