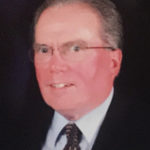 He was born March 23rd 1943 in Elmhurst Illinois to Fred and Elvira (Oltendorf) Dieckhoff and was raised on a dairy farm.  Erv earned an associate degree from Elgin Community College and graduated from DeVry.  He was employed by GE Healthcare as a support engineer for over 34 years.

Erv was a member of Holy Trinity Lutheran Church, Elgin. He served on the council as well as  sang in the choir.   He enjoyed being with his family and friends and would readily assist anyone who needed it.  He was an excellent problem solver as an engineer at work and home. He enjoyed the outdoors.

He was preceded in death by his parents, Fred and Elvira.

In lieu of flowers donations may be to Holy Trinity Lutheran Church, the American Cancer Society, the Parkinson’s Foundation, the Michael J. Fox Foundation or to a charity of your choice.