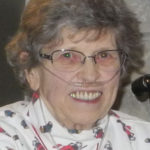 Dorothy was born on March 25, 1940 in Chicago, moving to Elgin with her parents when she was 12 years old. She attended Grant School, Abbott Jr. High, and Elgin High School, graduating with the class of 1958. Over the years, she was employed by McGraw’s, Lee Ward’s, Spiegel Catalogue, and Firstcard. She was a very competent and detailed bookkeeper, secretary, and volunteer income tax preparer.

She married Ray Heneise on August 29, 1959 at Holy Trinity Lutheran Church, Elgin, having been friends with him at church and at high school. Singing together in choir was always central to the couple’s church involvement and it fostered a love of both music and church life in their children.

Along with working full time, Dorothy was active in the Elgin Moose Club, Kwo-Ne-She Dancers, and Stephen Ministry. Dorothy relaxed when camping and crocheting, but played board games and card games to win!

After retiring in 1999 and relocating to Hot Springs, AR, Dorothy worked as a part-time secretary at Prince of Peace Lutheran Church and made a few dear friends during the 16 years that she and Ray lived there. Health challenges brought them back first to Montgomery/Sugar Grove and then to East Dundee to be close to family and friends.

Dorothy, an only child, was preceded in death by her parents, James Long in 1992 and Marjorie Long, nee Bollinger in 1973. She is survived by Ray, her devotedly loving husband of 59 years, and by their children Nancy Curran, David (Christine), and Valerie (Perry) Reh; grandchildren Jeremy and Michael Curran, Melissa (Cory) Day, Christian and Joellie Heneise, and Stephen, Anthony (Katlyn), Natalie, Mitchel, and Quinton Reh; great-grandchildren Lilly, Dylan, and Vivianne Day, and Charlotte Reh.

Visitationwill be at O’Connor-Leetz Funeral Home on Monday, January 7, from 4:00 p.m. until 8:00 p.m. The funeral service will be held at Holy Trinity Lutheran Church, 357 Division Street, Elgin on Tuesday, January 8 at 10:00 a.m. with Pastor Jeffrey Mykiska officiating. Burial will be private.