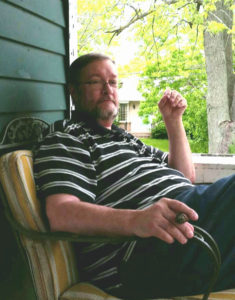 Mr. David Lee Duncan, 64, of Elgin, IL, died March 10, 2020 surrounded by his loving wife and family. David was born in LaSalle, Illinois on November 25, 1955 to Janet (nee Holmes) and George Duncan. David was a graduate of Irving Crown High School in Carpentersville IL, then earned a black belt in TaeKwon-Do. Dave was an avid sports fan and dedicated Cubs, Bears, and Hawks fan. He was passionate about hunting, to include receiving membership in Pope & Young club for a very large deer. Dave joined the family tradition of golfing a little later in life. He found he loved it and played the game well. He enjoyed fishing Lake Shabbona.  Most importantly he had life-long friends who shared these interests with him for decades. Dave worked for 43 years at Flexonics Corp. in Bartlett, IL and served as President and Secretary of the local IAMAW Machinists Union. Flexonics is where he met his beloved wife, Maria 18 years ago. They shared a wonderful love for each other ever since. He treasured his new-found family on her side as his own. He was an amazing husband, father, grandfather, son, and brother. He was loyal beyond words to all who he loved. Dave is preceded in death by father George Duncan of Rock Hill SC, daughter Jennifer Turner of Dyersburg TN, brother James Duncan of Springfield VA, mother-in-law Sara Flores of Elgin, IL. Dave is survived by wife Maria Duncan, son Frank Varela of Elgin IL, daughter Chrissy Duncan of Ridgeley TN with her children; Sierra and Nadia Cooper, daughter Brandy Wood of Hornbeak TN with her husband Robert and children; Jacob, Tyler and Gunnar Wood, his late daughter’s children; Abby and Ethan Turner, mother Janet Duncan of Rock Hill SC, brother Richard Duncan of Centreville VA. Visitation will be held at O’Connor-Leetz Funeral Home in Elgin on Friday, March 13 at 9:00 a.m. until time of service at 11:00 a.m. Service will be officiated by Father Robert Camacho and Pastor Jeff Mikyska of Holy Trinity Lutheran Church.