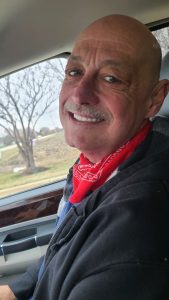 Daniel Joseph DiFiore, 61 of Elgin, passed away on May 11, 2022 at Sherman Hospital in Elgin.  Daniel was born September 24, 1960 to Sandra (Johnson) and Thomas Difiore. He was a loving Father, proud grandpa, and fiercely loyal friend.
Dan had a love for cars, stock car racing, and Nascar. He was a jack of all trades and could pretty much fix anything you needed help with. He never would hesitate to help anyone, if you asked, he would be there. He would have given you the shirt off his back or even the last dollar in his pocket. He did things for people with no expectation of anything in return, even during the times he was struggling with his own demons.
Dan struggled with addiction for most of his life but by the grace the God, the last years of his life he was sober and got to spend a great amount of time with his family and grandkids. He always had knick-knacks for the grandchildren and loved to make everyone around him laugh. He could always make a bad day better. Daniel is survived by his Father Thomas; brothers Tom and Leonard, his daughters Nicole, Kelly, Janell, and Mackenzie; Grandchildren Natalie, Lilly, Franky, Ari, Nick, Johnny, and Ava. He was preceded in death by his Mother Sandra, Step Father Wayne, and sister Penny. Visitation will be held Tuesday May, 17th from 3-7pm at O'Connor-Leetz Funeral Home, 364 Division St. Elgin Il 60120.  Interment will be private