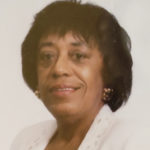 Billie L. Rouse, 81, passed away Tuesday, March 19, 2019. Born as Billie L Snowden, on June 1, 1937 in Jackson, TN to Louise Cole and J.D. Snowden. She graduated from West High School class of 1956 in Jackson Tennessee and was a cheerleader and also played basketball.

Billie retired from Elgin Sweeper but over the years she previously had worked at Elgin Mental Health Center, First Card Credit Card Center, Housing Authority of Elgin, and Sherman Hospital.  She was for a short time a small business owner of Elgin Cracklin, making and selling cracklin skins to local businesses in Elgin and Rockford. Billie was a member of the American War Mother’s. Until Billie’s failing health prevented her to attend church, she was a very dedicated member of Progressive Baptist Church and had served on the Board of Trustees. Billie loved decorating her home and had a creative flair for decorating and fashion. She was known for outgoing personality, her quick wit and no nonsense.