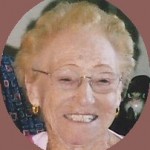 Angela Rose Lullie, 96, of Elgin, IL passed away on September 25, 2012 at Provena St Joseph Hospital.  Angela was born to Anthony and Josephine Lazzara on October 11, 1915 in Elgin.

Preceding her in death were her parents, four brothers and one sister.

Angela worked at the Elgin National Watch Factory and was an active golfer and bowler for many years.

Visitation will be Thursday, September 27 from 4:00 p.m. – 8:00 p.m. at the funeral home. The Funeral Mass will be held Friday, September 28  at 11:00 at Saint Mary’s Catholic Church in Elgin followed by interment at Mount Hope Cemetery.